Coming up with a variety of Movember Portrait ideas the last two years was hard. I thought I would take you Behind the Scenes of Movember Portraits 2014, explain a little about my motivation, where I get the ideas and show you how some of the shots were achieved.

2013 saw the launch of my very first photography project, ‘Movember Portraits’. During November each year, the Movember Charity is responsible for the sprouting of millions of moustaches around the world. With their “Mo’s” men raise vital funds and awareness for prostate and testicular cancer and mental health. As an independent global charity, Movember’s vision is to have an everlasting impact on the face of men’s health.

At the beginning of 2013, my Father in Law broke the news that he had been diagnosed with Prostate Cancer. As he lives abroad, my wife and I found we felt a little useless but I knew I wanted to do something. I initially decided that I would participate in Movember but I also knew that wouldn’t raise a great deal of money as an individual.

I then decided I should use my studio and invite people in to get professional images for a small contribution to Movember and then from there I decided to put my own stamp on it. I like to be a little different and that was where the caricature portraits came from.

I’m delighted to report that my father in law is now better but this happening truly opened my eyes to how important the Movember charity actually is and the project came from my desire to do any little thing I could.

Creatively, this is probably the most difficult photographic thing I do. In 2013, I had to come up with 30 different Portrait ideas that all follow the same crop with the same subject (being me) and the same lighting but every image has a different outfit. I also wanted to do every single image myself with no assistance. In 2014, I knew I wanted to do the same idea but with a new lighting setup and background so there was a distinct difference from the previous year. I also knew I wanted to avoid repeating any 2013 shots and I wanted them to be more extreme than previously. Not easy!

I have to go in to the studio every day regardless. You can’t miss a single day so it’s important to not go away for a weekend or go and visit family. With Metadata embedded in each image, people could easily find out if the image was actually taken on the day I said so it really wasn’t an option to do two in one day for example. 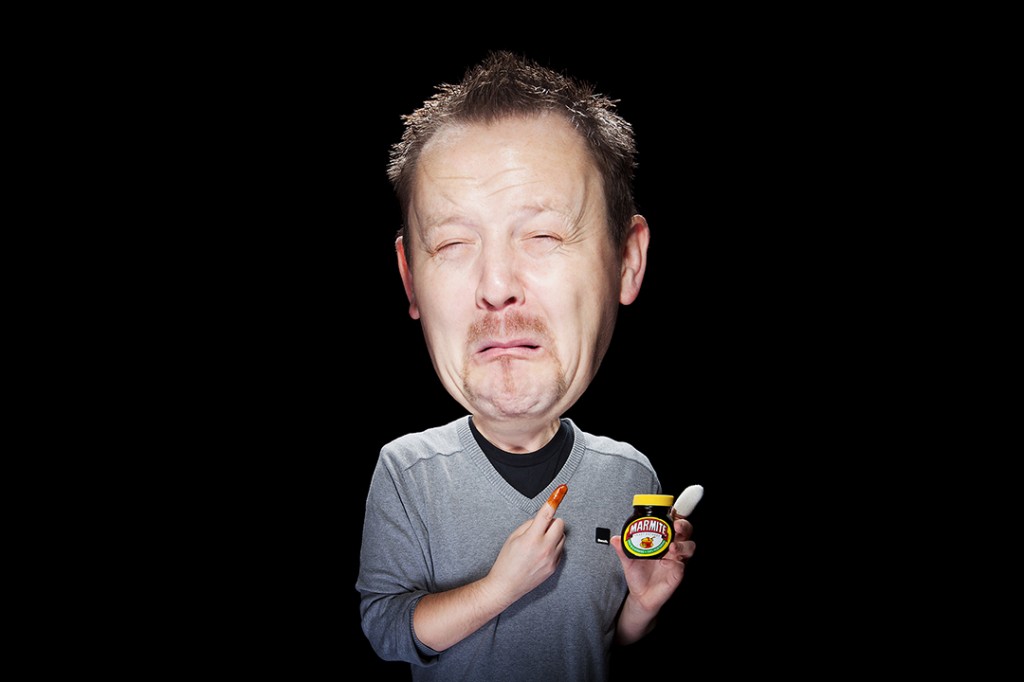 I started writing some Portrait ideas down from around August to try to help a little but in the most part, the ideas came from real events that happened on the day or things that were said. So for example, before it even started, I know I would be doing an image to mimic the Andy Murray GQ shot. I also knew I would be using a friends body to make me look ripped as well as the marmite shot. There were a couple of other Portrait ideas I had planned but they never happened. 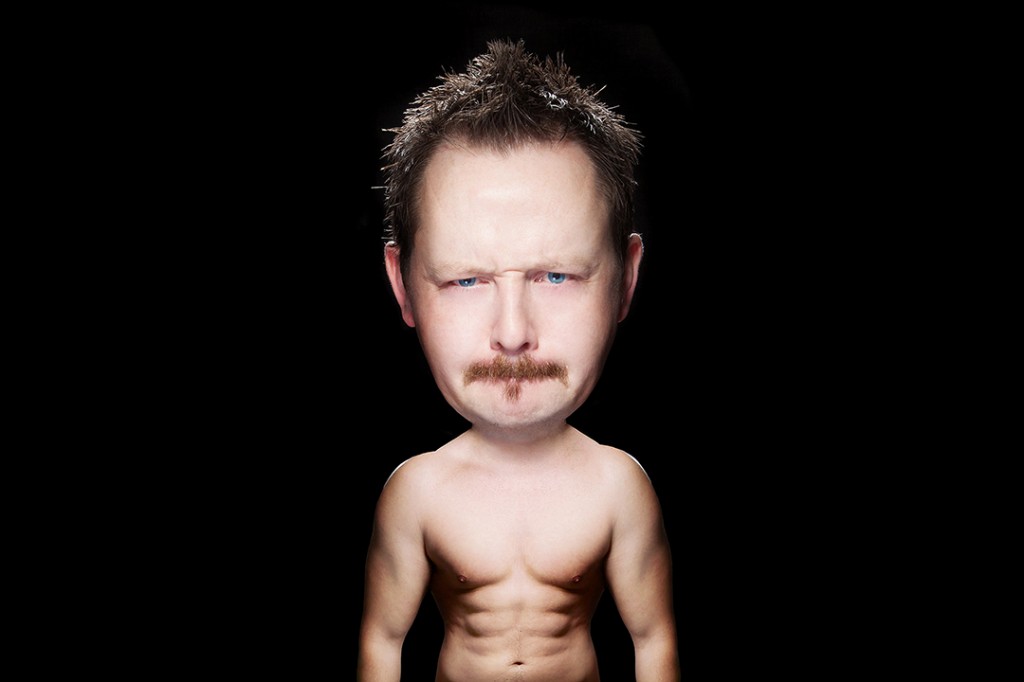 The start of Movember Portraits 2014 wrote itself when I genuinely took off a large chunk of my finger-tip with my razor. My finger was in a bandage for 12 days so you can see some tube bandaging on day 3 and a coloured one on day 10 where as the other shots, I tried to keep it hidden.

With all the shots, the studio was set up in the same way. A black sheet was placed at the back to ensure no light went on to my white walls along with two black polystyrene boards to either side of me for definition. I then had 3 studio lights, one above and slightly behind with a small soft box as a hair light; one in front slightly above head height lighting my face with a dish and a small honeycomb and then another light turned down low at floor level with an umbrella to add a little fill under my neck and to my body. 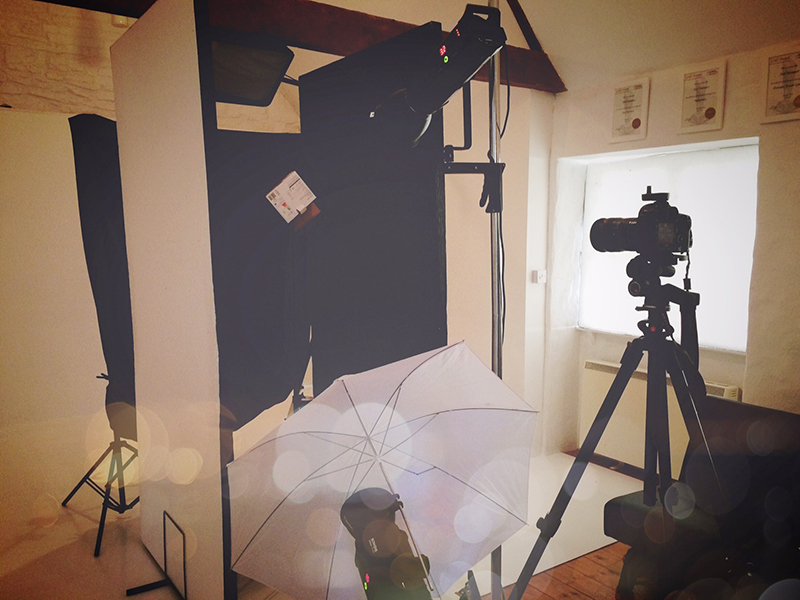 The camera was then on a tripod at my head height around 8 feet in front of me with a focal length of 50mm and set to infrared so I could use a remote to set it off myself. This was particularly challenging with shots like Day 13 as I had to get in position, fire the camera which then had a 2 second delay to fire before I threw the trainer at myself while keeping myself as upright as possible. I wanted the trainer to be thrown as holding it against my face wouldn’t have natural movement in the laces. Each day I would set everything up, use a lighting stand positioned where I would be standing to manually focus on and then do my shot. As this time of year is generally busy, I then had to break it all down again to get on with my day-to-day work. 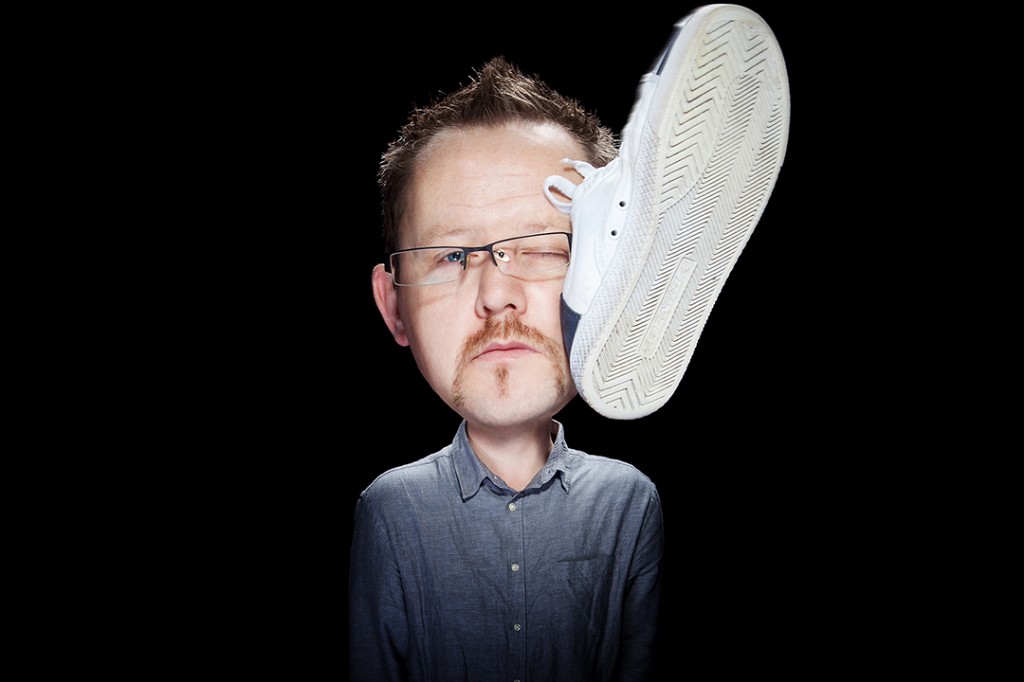 On some days, inspiration would happen straight away and I would just know what I would do when I got in. On other days I would sit in an evening in a day-dream while Masterchef was on trying to just figure out what the next days image would be. Then there were also days I would find myself wondering around the studio looking for things I could use and trying to decide what would work and what wouldn’t. Day 27 was a perfect example. My original plan had been to follow up the shot of me looking ripped with a shot of me looking extremely fat (a little less Photoshop required for the latter unfortunately). I did the shot, which took around 15 minutes to do after the studio was set up and then retouched it. Most images retouch took around an hour depending on the amount of work required. Once the obese shot was finished, I looked at it and decided that I had already featured a couple of topless shots and that the overweight image was a little too convincing. I didn’t want people to actually think I had boobs like the image featured.

Because I decided not to use it, I then spent around an hour racking my brain what to do and going through cupboards. The only things I could find were the bits I had for making my lunch and some crisps that were in my car so the ultimate sandwich came together for a mid morning snack. To then retouch that was another hour so a half-day had been lost to achieve that days image.

The fun shots to do were the ones that I knew would require multiple images to make it work. Subtle ones were things like Day 4 when I did the selfie. I had to do the shot with the phone and then another Movember shot at the angle the phone was at so on the phone I had the enlarged head as well. This isn’t something anyone would really notice but I wanted this little detail to be perfect. Day 12 involved me taking a shower in to the studio from home and hooking it up to a lighting stand above me. I would then blow water through on to myself, which you see from the forehead up. I then got the shot of the body with the soap and also the shot of me singing once my face was wet and they all came together to make the final picture. Finally Day 22 involved changing the lighting to look like it was dark and I was using the lantern to light my way. I did the shot for my body and face and the outside of the lantern and then had to do another longer exposure to get the flame and inside of the lantern. If you look very closely, there is a reflection of the flame in my eye.

I’ve always been a stickler for the detail when I produce any of my composite images such as kids being flung through the air or babies sitting on stacks of books. The reason is if you don’t worry about the subtle detail, it will simply look like a Photoshop image and the quality will have been lost. If someone looks at a shot and doesn’t realise straight away it must have been multiple shots then I’ve won. 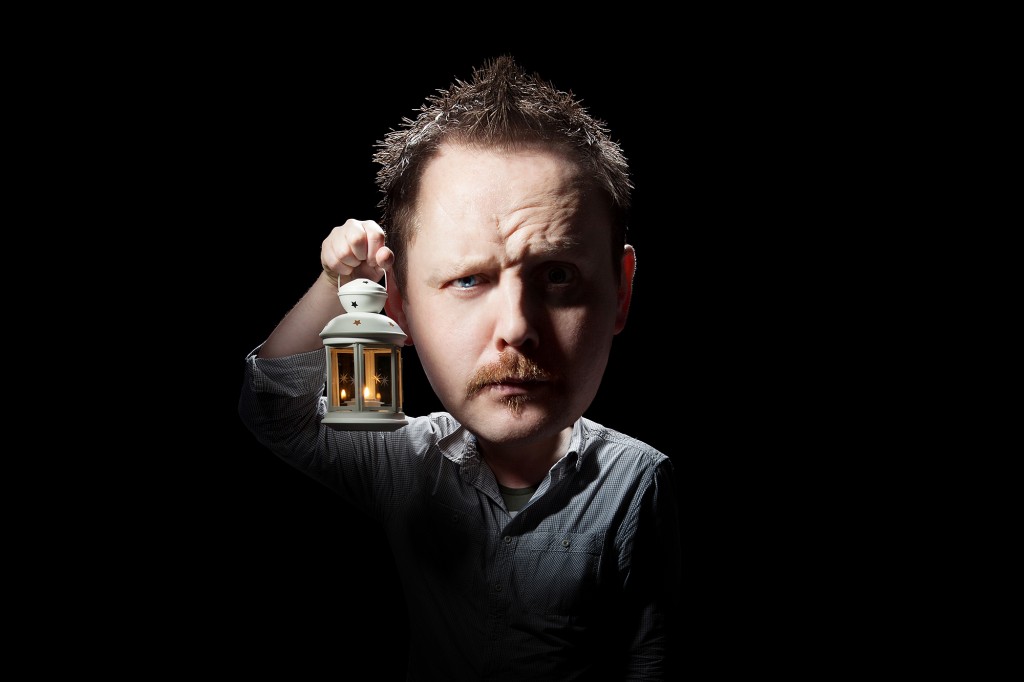 It did make me laugh when I met some friends the evening after posting the last image and they were looking at me funny while I spoke. I thought for a moment that I must have something stuck in my teeth before they admitted they were trying to figure out if I’d actually pulled out a tooth. Their second assumption was my front tooth was a fake. Both assumptions were wrong but I was delighted that they couldn’t figure it out.

Coming up with original Portrait ideas can be difficult and I personally like so many people will find inspiration in a lot of other photographers work. The great thing is that sometimes an image you like and decide to mimic can then spark off another idea growing in to something new in itself.

Every image has a story to accompany it. If you want to see the full set with the descriptions then visit the album on the Made Portraits Facebook Page!