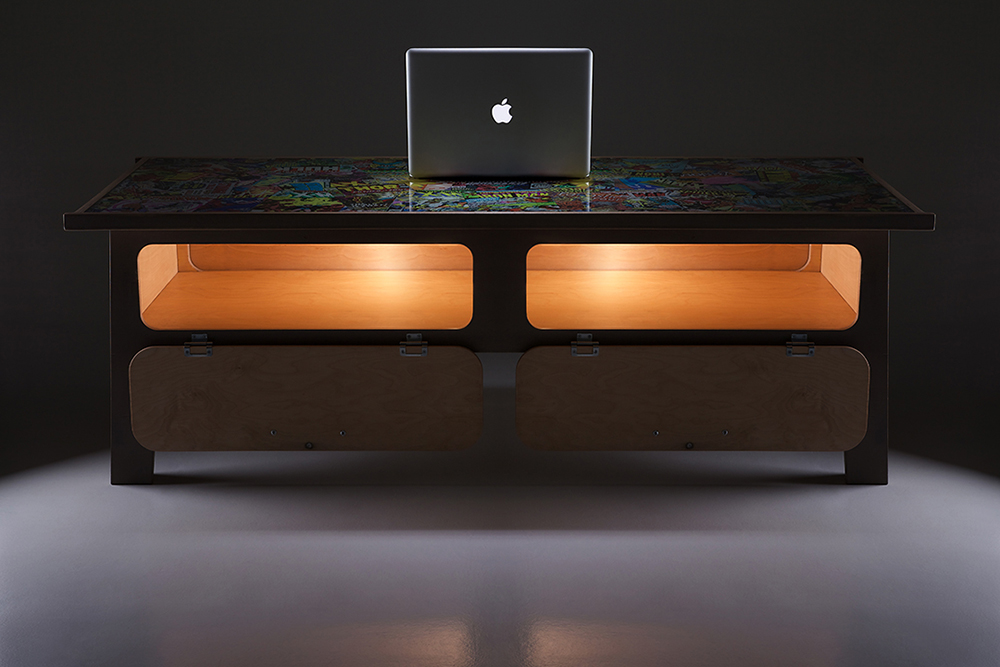 Have you been looking for a Somerset Product Photographer? John Tucker Carpentry had been and so he approached Made Portraits to photograph a very smart Retro Coffee Table he had made and was looking to sell online. His Marvel coffee table deserved photography that showed off the high end finish he had achieved.

John had tried to photograph the table in his workshop and although he wasn’t sure what look he wanted to achieve, he knew he wasn’t getting it himself which is why he came to Made.

I knew that first and foremost, there needed to be shots that showed how the table worked in terms of the storage area and also that it needed to be seen from all sides. The beautiful design on the top of the table also needed to be seen showing any potential buyers the quality and detail. A close up was the best way to do that and this would also show the lovely edging of the wood.

Once I had captured the showroom shots of the table, it was on to capturing the true Advertising image of the table. I considered the target market for a table like this. The young professional that likes the finer things in life. This gave me the idea to use a desirable product such as the MacBook Pro on top of the table which would show the glass top with its reflection.

I used a honeycombed dish above the coffee table to give the illusion that the laptop glow was lighting the table itself and then to the sides of the coffee table I placed a couple of strip lights to rim light the edging. Although there wasn’t a light inside the table, I knew it needed to glow to show the beautiful interior and to add a little colour to the overall image. I placed a couple of speed lights inside with pocket wizards attached and this created a beautiful warm effect.

The next thing was capturing the glow from the Apple logo on the laptop and so the studio windows were blacked out, the lights all switched off and the camera was set to a long exposure.

I loved the effect from the first shot and although there were a couple of little tweaks to keep the symmetry both with the lighting and laptop positioning, it was pretty much there. John came to pick up the table and was delighted with what I had managed to achieve in such a short period of time. He also loved the glow inside which has inspired him to add lighting to the table itself.

Made has built its reputation on being creative with Portraits and Weddings and now we’re winning awards as your Somerset Product Photographer. Check out some other work here.